The Keighley Cenotaph is a Grade II* listed War Memorial, it can be found standing tall in Town Hall Square within the centre of Keighley, West Yorkshire.

Our first encounter with this monument was in 2014, when Keighley Town Council appointed us to conduct an intensive clean for the 100th anniversary year of the start of the First World War.

The work started with an initial clean to remove fungus and debris, we were then able to assess the site properly to see what would be required next. 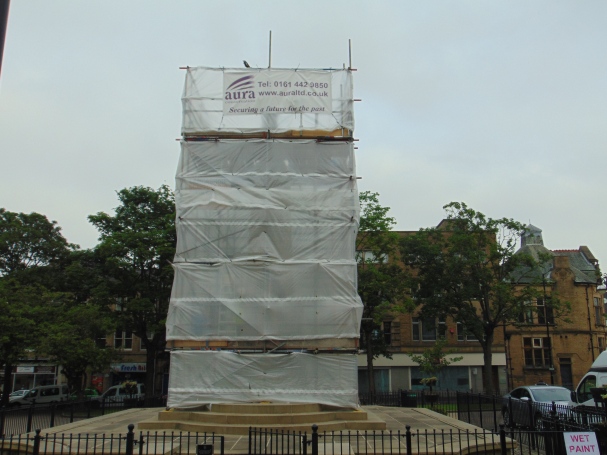 Some flagstones did need lifting and re-laying to level them to prevent standing water from causing unnecessary damage. The stonework was DOFF cleaned thoroughly and re-pointed to bring back up to its original standard. The life-size bronze statues were cleaned back to their original state, there are a plethora of influences that the environment can have on outdoor bronze sculpture so much care and attention was taken. They were then treated and waxed to ensure some protection from weathering. 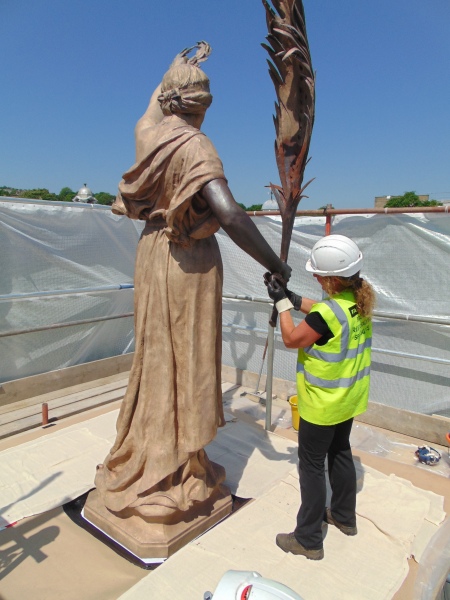 We return to Keighley annually to clean the stonework on the Cenotaph and protect the bronze statues which stand tall and proud in the Town Hall Square, in time for when 11th November comes around.

Constructed from: Sandstone – from the local Eastburn Quarry.

Number of statues: 3. Victory stands at the top of the Obelisk, one hand stretched with a laurel wreath, the other hand holding a palm branch. Life-size statues of a seaman and an infantryman on the east and west of the pedestal support stand proudly. The seaman is holding a telescope to his right eye; the soldier stands at ease in his full battle dress. Dress, weapon and equipment are depicted beautifully in detail.

Statues made from: Bronze.

Monument reads: “1914-1918 & 1939-1945 IN PROUD AND GRATEFUL MEMORY OF THOSE MEN OF KEIGHLEY WHO GAVE THEIR LIVES IN THE GREAT WAR AND THE WORLD WAR IN DEFENCE OF FREEDOM AND JUSTICE THEIR NAME LIVETH FOR EVERMORE” 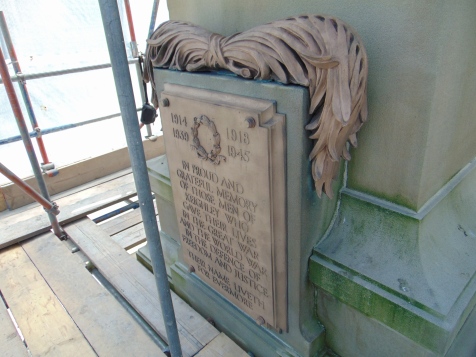 View all posts by auraconservation